I Feel the Need to Experiment 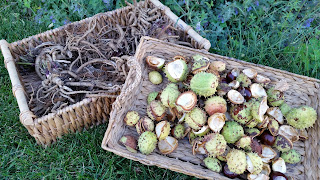 I need to have a "what if?" moment. In the basket at the back is elecampane, which for all my research seems to be a definite possibility of a firm maybe as a dye plant. About the only thing I could find about it was from a book written in Ireland in the 1700's saying that you mixed it with ash and wortle  berries to make a blue dye. Ash, I get. But what in the world is a wortle berry? Turns out it is a wild European blueberry. One that is similar to our blueberries in the Americas, but with more staining power than ours. It kind of makes one wonder if the elecampane is actually an adjunct or mordant rather than a dye, although it is in several lists as a blue dye on its own and the seeds are sold as a dye plant. Being one that loves to experiment, I decided in the coming days to try out various methods and see what happens. The wild blueberries here are long gone but there are still plenty of blue elderberries on the trees, so I thought I would use those instead. If I am feeling particularly rich one day I might grab a small tub of blueberries from the store and I am planning a couple of experiments with no berries at all. Then, there are still some huckleberries in the freezer, which make a wonderful purple stain on everything-but they make even more wonderful pancakes, so I may not be willing to part with those in the name of art. Even if it doesn't work as a dye without the berries it might be interesting to see what it does as a mordant.

The basket in front is horse chestnut hulls. I did some experimenting with them before, as I remember they made kind of a brown dye, which I used as a base or pre-mordant for eco printing since I had no idea if it was permanent at the time. Supposedly, the horse chestnuts themselves will make a soap with bleaching properties. I want to give that a try as well, horse chestnuts being everywhere it seems like one should be able to do something with them.

Stay tuned to see what happens next!