And Now We Wait

I taught a class last weekend and while I was gathering plant material I grabbed a couple of "experimental" ones. Meaning, either by some miracle I had never tried them, or, I did and couldn't remember whether they worked or not. I like to include an unknown as I think it gives students the "permission" to go out and take a chance on something. It is not the end of the world if it doesn't print; and then I remind them that just because it didn't work with the mordant we are using, or at the time of year the plant was picked doesn't mean that it wouldn't print under other circumstances.

We are living in a jungle of  flea bane (Conyza canadensis), also known as Horseweed as supposedly it is irritating to horses. There doesn't seem to be a consensus as to whether it actually repels fleas, but our dogs never had any!
I simply love it when I find something that is everywhere, in the way, and generally making a nuisance of itself, prints. In this case it is a member of the sunflower family, so it does make sense that it printed yellow or green. 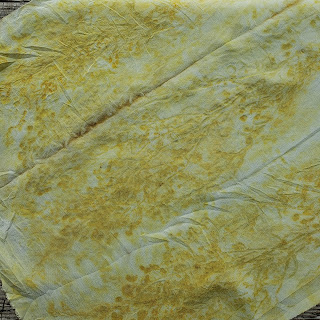 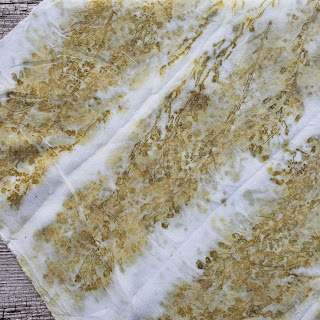 Since it is a member of the sunflower family and it "should" do this I have no reason to believe the paper would change much over time. Fabric can be a different ballgame so I will leave it hang on my studio closet doors until next spring to see what happens to it. Once the out of control grapevine has been put back in its place for the year that wall will get moderate morning sun through the windows until we really hit the depths of winter so that is a pretty good test on "wearability". I will wash it out then and see what it looks like.

Remember to take a look at my Etsy Shop, Facebook page and Instagram
Posted by Nan Drye at 2:20 PM No comments:

"Pink makes me feel both young and old. There is no in between."
Anthony T. Hincks

You can catch up with Drye Goods Studio on Facebook and Instagram and I am putting new things in my Etsy Shop almost every day!

The Only Constant in Life is Change

"Man cannot discover new oceans  unless he has the courage to lose sight of the shore."
Andre Gide