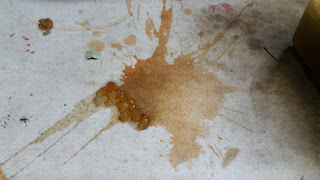 I am always trying to find something to do with things there are plenty of, in this instance, horse chestnuts. They are everywhere in the fall and are something of a nuisance to home owners. I had done a bit last year and vaguely remember the swatches I did coming out kind of beige and were promptly used to eco print with no documentation as to how it all came out. This time, I separated the hulls from the nuts and let those soak for a couple of days. I was really hopeful when I spilled some transferring the soaked hulls to a cooking pot and it left a really kicky orange splash on the floor. 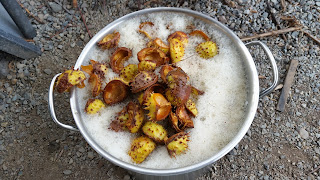 I cooked them for about an hour and then strained out the liquid into several pots. Since I already had dupioni swatches pretreated in various ways I decided to use those. Reading left to right, the first one was treated with soda ash, the second I poured the dye in my trusty iron pot, and the last was a pretreat with alum. The results were nice, but not kicky orange. 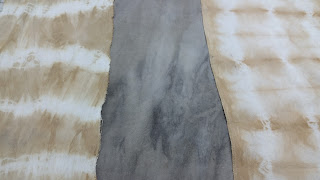 The next day or so, I was digging around on the internet and found a post on the February Twelve Blog where she got a really lovely brick red on wool. She added a bit of ammonia to the initial cooking liquid. I hadn't ever added ammonia to a dye bath and since it was a tiny amount and I just happened to have a tiny amount under the kitchen sink, I decided to try it. As you can see, no matter what the pre-mordant, I got pretty much the same color over and over. So much so I decided it was better to leave the plastic hangers in the picture so you could see they were actually different pieces of fabric. It could be it is just different on silk than wool, or that I let them soak or cook too long, or that the water here is really hard-who knows? 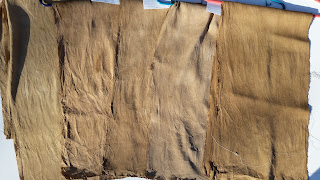 Never fear, I use this sort of thing as a first layer for other things. The top and bottom images are of the "browner" samples treated with iron-rusted nails and steel wool along with plant materials; the middle one is the sample that the dye had been cooked in an iron pot that I then eco printed with windfall leaves. 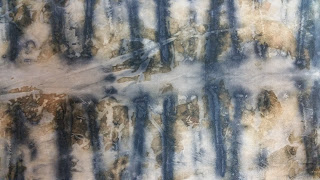 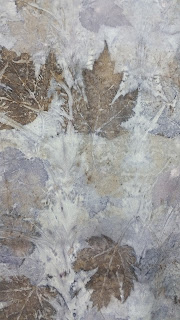 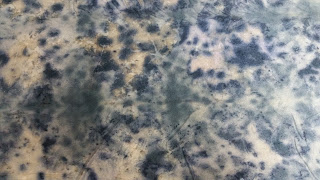 What to do with all these noodles of brown fabric? I call this a beaded infinity scarf, although it is more of a necklace. 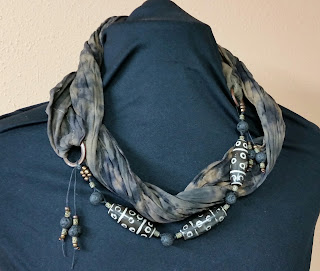 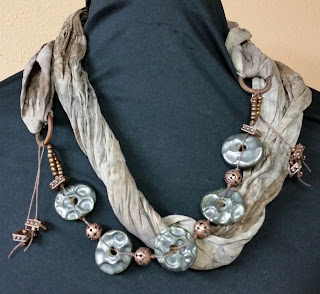 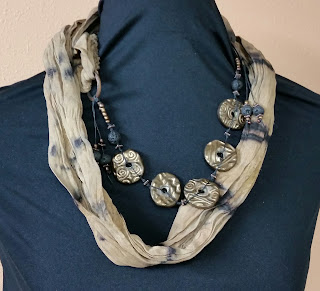 You may be wondering what happened to all the nuts that came out of these hulls. Well supposedly they make a soap with bleaching properties, although it sounds to me like it is more of a "bluing" if you know what that is. Anyway, the crucial ingredient is rain water instead of hard water, and rain water is something we have been short of. Today it is raining! A lot! So I put out a bucket and will hopefully have enough to make some soap.
Posted by Nan Drye at 9:23 AM