"We must be willing to let go of the life we've planned to have the life that is waiting for us." 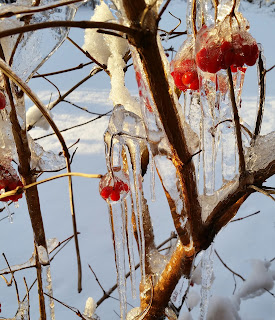 Cleaning out the Freezer Part 2 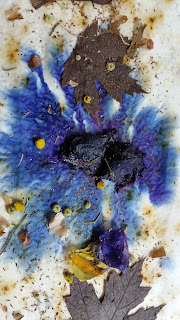 Ok, don't get excited, it won't stay that color, but I just had to take a picture of it. I used smaller pieces of silk jacquard for this as I like the play of the eco print on the finely textured fabric. The leaves I am using are maple leaves collected and pressed in the fall along with dried tansy and frozen iris petals. You may wish to wear gloves for this part as the iris petals do a fine job of turning your cuticles blue. 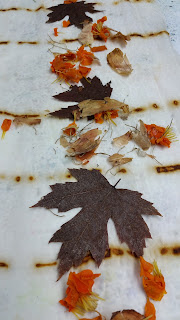 This is the other sample I did, again the dried and pressed maple but this time I added onion skins and frozen marigolds Both of the above samples were pre-mordanted with rusted objects. 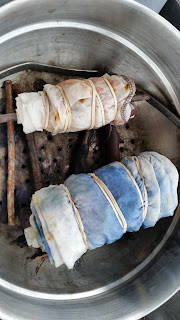 Steam for an hour and allow to set until almost dry. 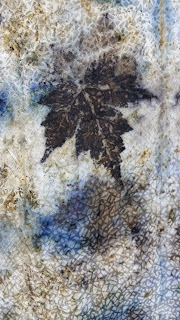 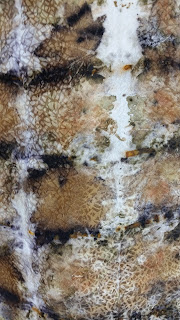 The top picture is the sample with the iris, as you can see the color is more muted, but still a lovely shade of blue. The second is the sample with marigold and onion skin. The green flecks in the second one are the marigold, which, like a lot of flowers that make yellow, make green when exposed to iron or rust. The onion skins vary from a gold tone to green to black depending on how much contact they had with the rust.
Posted by Nan Drye at 1:55 PM No comments:

"It adds up to something else. Life is not, after all, made up of grand moments, grand gestures, glorious achievements. Life is made up of many days filled with small things. Shopping, going to the post office, using the telephone, keeping house-these make up the chief sum of our days. And to me, it seems infinitely greater to make all the people one sees feel a little happier for it than to paint a masterpiece or be in the bright lights on Broadway. After we are all gone down the river of time, the simple kindness of those who fulfill their daily tasks graciously will overbalance any special feat." 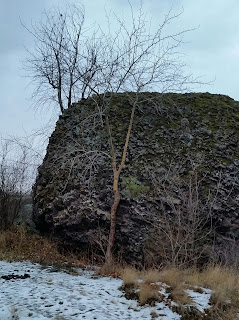 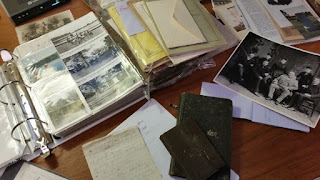 I have been putting this off for some time but decided to get on it. My mother's family can be traced back to the 1300's in England. They settled in Iowa and I have good memories of visiting the homestead farm. My mother drug all this stuff home intending to organize it and never did. Now I am working on it, today's find is a slip of paper giving instructions for dyeing fabric. I am making a guess that Great Aunt Lucy wrote this down, since I am getting to the point of recognizing the other's hand writing. She never married and it sounds like she took care of everybody from her aging mother to single siblings to farm hands and on and on. She had a degree in art and I have a few samples of her work. I can't tell from the rather cryptic notes whether this is for plant dyes or some sort of "new fangled" synthetic dye, she was born in 1860 so it is possible she was trying out a synthetic dye. I found this in an envelope with her cookbook. In addition to recipes cut from the newspaper, it also contains some rather bad poetry, also clipped from the paper, I may have to share some of that at some point.
The yellowed slip of paper to the left of the black journals is the dye instruction, the large photo to the right is of my great grandfather and his siblings, Lucy included.
Posted by Nan Drye at 4:30 PM No comments:

Cleaning out the Freezer, Part 1

It was about time as I found some things that had been in there way too long. That went into the compost pile and I moved on to what was usable. If the zip bags are full of too much frost the flowers are probably not good for much. I decided to do some jar dyes and a couple of steam prints on some silk jacquard I had sitting around. I like the way eco printing looks on a textured fabric (sometimes).

My advice on saving stuff in the freezer would be to actually break the flowers apart and use containers or bags that allow you to expel extra air. This keeps the materials in good condition and takes up less room than trying to store whole flower heads.  They won't print anyway, just help to dye the background of the fabric.

First the jar dyes. Normally one would set these up and put them in a sunny window to pleasantly cook away over several months. Since there is little chance of that much sun at this time of the year in Spokane, when I finished them I set them in a bread pan on a heat register in the living room. Not terribly romantic, but it does help to be able to keep an eye on them. Sometimes this sort of thing gets a bit fizzy. 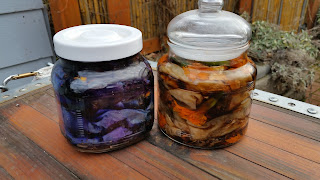 The method for this is to layer the fabric and plant materials very densely and then pour some sort of liquid over the top and put on the lid. If you are going to process them in a boiling water bath you would want to use actual canning jars and keep pressing everything down as you fill the jar to get as much air out as possible or they will spew all over the canner and you will lose a lot of your liquid. I did it once and decided for my purposes it wasn't worth wasting the energy on it.  The colors lost their vibrancy, the jars were still little bacteria farms and what color was achieved was just as fugitive as the jars that simply sat around for months with no cooking. I use this method to eco print on, so I thoroughly expect that the color achieved in the jars will change. It seems like a very long first step, but the results can be amazing.

Think about the way things smell before doing this. If it is pungent to begin with, after a couple of months it could be horrifying. Take it from me, don't use seaweed or dried woad for this method. EVER.

The jar on the left has in it what I call "Kim's Iris" as that is the friend that gave them to me. They are so purple they are almost black. There is also some dried tansy flowers and red tea in there as well. I poured boiling water over it to get some action going. The second jar is marigold and onion skins with the remains of the morning coffee as the fluid. Both pieces of fabric were pretreated with rusted nails or steel wool, which also involves vinegar and salt, so that would be the pre-mordant.

Hopefully, I will remember to show you what happened in a few months. The next post will be about actually using frozen stuff in an eco print.
Posted by Nan Drye at 11:59 AM No comments:

What does an Eco Printer do in the Winter?

From the looks of this blog, not much! Actually, in addition to activities like cleaning the studio and the show truck, catching up on book work and housework, I also catch up with other art forms and friends. I have been hanging out at Urban Art Co-op, a ceramics maker's space in Spokane. Mostly, I have been doing pendants for future eco print projects, but I did get a chance to help with the holiday fundraiser and that was fun. 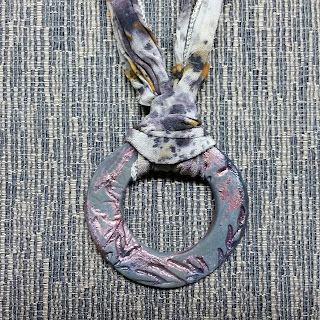 This one is a raku pendant with an eco printed scarf, it took me forever to figure out how to do the clasp, but I finally found the right parts, I am happy with the way it came out. When my Etsy site comes back from holiday vacation, it will be on there. 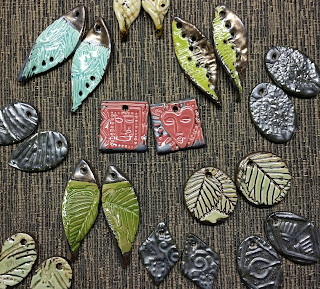 These are pendants that will get put onto lariats eventually, lots of experimentation with glazes, this has lead me to a lot more ideas, so I had better get on it! 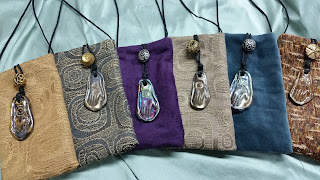 I had done all these little hand pendants last winter and never knew what to do with them. Voila! Handbags! These are currently available at Pottery Place Plus in downtown Spokane.

The next thing I will be doing is cleaning the plant material out of the freezer-I got "the look" from my husband the other day as whatever he was searching for in there was buried by bags of frozen flowers. Can't have Mr. Man on a tear, now can we?
Posted by Nan Drye at 10:43 AM No comments:

Thought for the Week 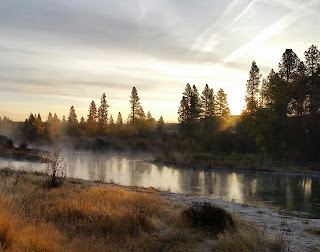 "I am erecting a barrier of simplicity between myself and the world."
Andre Gide
Posted by Nan Drye at 7:37 AM No comments:

"I am trying to be unfamiliar with what I am doing."
John Cage 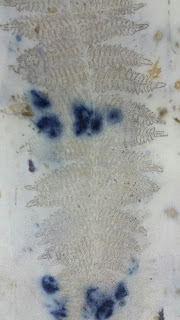 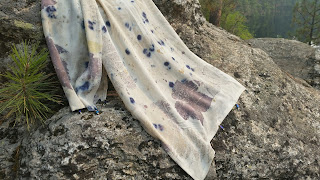 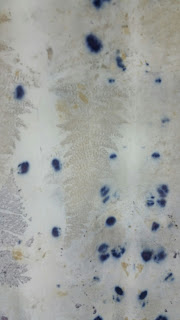 I had to show off some work from my class last summer. Merrilyn Reeves is a potter, mid-wife and herbalist. You can see her pottery on her website at www.wildwoodpottery.com

She took my eco printing class at Urban Art Co-op in August, then took it a step further and worked on paper-and look at the results! Wow! 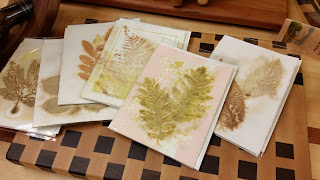 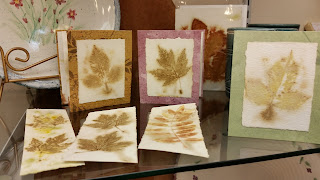 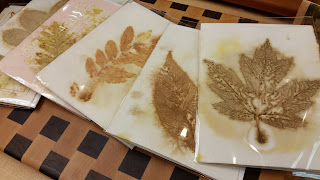 We are both members of Pottery Place Plus in Spokane, come by and see our work the next time you are in town.
Posted by Nan Drye at 10:02 AM No comments: