I am Only Happy when it Rains

After 80 days of no rain and 20 or so days of choking smoke filled air the last few days have been a relief. The air is washed clean and everything seems to have been revived. Even the birds and the insects seem more energetic.

Iron as an Adjunct

My husband had planted a black walnut tree in the yard sometime ago and it finally got big enough that I could take some leaves to see what happens. I had some seen some really great results on the web, but had never had much luck.

I thought about using an adjunct, which means a mordant you apply during or after the dye or printing process. It affects what you have already done.

I started with an alum treated scarf. I also added some contorted filbert leaves to the roll as I didn't think I had tried them with an alum mordant. As you can see the result was a really zingy yellow.

The shapes of the leaves came out pretty well but the prints weren't terribly detailed. I have had good luck with soaking material like this in either the iron pot or a pan of rusted water. Since I hadn't worked with rusted water much this year, I decided to do that. To make rusted water put a few rusty objects in a quart jar. Add a couple of tablespoons of vinegar and fill the jar with water. Put the lid on and let it set for about a week or so. When the water is orange it is ready to use. For a 14"x 72" scarf you will add about a quarter cup of the rusted water to about a half gallon of water in a neutral pot (enamel or stainless steel). I add a splash of vinegar to this. Heat the water up to a simmer and shut off the heat. Let it cool off to lukewarm. Wet the scarf out and put it in the pan of rusted water.

Then keep an eye on it. Most of the time it will start to turn green right away. It will continue to darken with time. Depending on the plants you used to print with sometimes it will turn them black. They end up looking like somebody with a lot more drawing skills than I have sketched them on the fabric. Keep stirring it around and rearranging it to help even out the color change. I left mine to soak overnight, chancing that it would become really murky, but sometimes you just need to find out what will happen. Remember that wet fabric appears darker than dry fabric and the rule of thumb is that when dry the fabric will appear to be two shades lighter than it is when wet. Remove it when you think it is going to be dark enough.

As you can see it turned charcoal and green. The background is more green that it appears in the image-kind of a light sage. I really liked the effect much more than just the yellow. While it was a really pretty color, the prints have more detail and depth after the rust bath.
Posted by Nan Drye at 3:49 PM No comments:

"The creation of a thousand forests is in one acorn."
Ralph Waldo Emerson 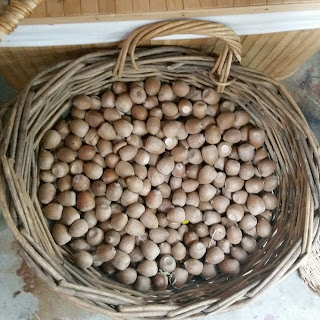 Email ThisBlogThis!Share to TwitterShare to FacebookShare to Pinterest
Labels: quotes

I have never minded the interplay between layers of fabric in eco printing. Meaning, that when you bundle or roll up the fabric as it steams color from the plant material bleeds through the layers of fabric. Apparently some do, to the point of putting plastic between the layers. Although I am not big on telling other people what to do with their days, I am the person trying to get rid of all the plastic tubs and bags out of my studio and out of my life as even just sitting in the air you can watch them degrade and change. I wonder what sorts of chemicals I have been breathing in from the plastic junk we all have in our lives. So, you can probably imagine how I feel about cooking layers of plastic wrap. It is called eco (short for ecological) printing after all.

I have had some students that really, really wanted a "cleaner" look so I was pondering how one would go about that without bringing petroleum products into the picture. Since I had a brain fart a while back when laying out sumac leaves for this mythological lampshade I keep threatening to make, I thought I would use the do-over as an experiment in putting layers of fabric into the roll to see if it "cleaned up" or gave more definition to the prints. This might actually be beneficial when making a lampshade anyway. I hope the pictures are helpful, as the post title hints-we have a whole lotta gray going on.

I started by double checking which direction I wanted the sumac fronds to go first so I didn't end up with yet another very pretty piece of silk dupioni for which there is no immediate plan. Starting in from the edge of the fabric I laid out the sumac underside down since most leaves print out the underside of the leaf. I folded that layer over with no fabric strip inside it. 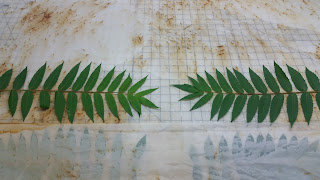 The next step was to fold the first set of leaves over the leaves that have the layer of fabric on them already. I worked from the outer edges inward; laying down the fronds, covering with fabric strips and then folding until the folds met in the middle and I made the last fold and rolled it up. This is a really big lampshade, so it is a really big roll. I let this steam for a couple of hours since not only was it very big, the dupioni is a thicker fabric the the crepe de chine I work with most of the time. I let it sit around about a week and then opened it up. The following pictures show the differences-I hope.

I think this was an interesting thing to do and was worth the effort. For the most part I am going to continue doing what I have been doing with scarves and shawls. As I said in the beginning, I love the play between the actual prints and the spirits of the prints from the next layer in the roll. While cleaning up the barn loft I found a piece of copper sheet, that could be an interesting thing to roll up in a bundle, and there is always aluminum foil.

And yes, here is where there should be a fantastic photo of the lamp. No such luck. I am still trying to decide if it would be better to use the original framework from the upcycled lampshade or to make a whole new framework. When I get the engineering worked out I will be sure to post pictures here first!
Posted by Nan Drye at 4:25 PM No comments:

" The love of learning, the sequestered nooks, And all the serenity of books."
Henry Wadsworth Longfellow