What Happened to September?

Or, from the looks of this blog, most of July and August as well?? Lots of travel and then racing home to make more stuff and then going back out again seems to be the answer. Mostly fun and successful like the Anacortes show, some very wet like Sequim ("No, those are not bunions on my feet they are just barnacles!") I also taught sun printing to a group of Japanese students from Mukogawa University that were here in Spokane and had a blast; their choices of colors were so different than mine and were so wonderful! I went to a friend's paper making soiree and ended up doing a botanical transfer method on silk. I want to play around more with that, but the weather is changing so it may have to wait until spring. Why can't I ever find anything that is not dependent on good weather? Maybe this is a sign I should just hibernate all winter.
Tonight I have been delving into a filing cabinet drawer. I do actually have some new pursuits but I am having a bit of trouble getting started. I decided to attack the drawer as I knew there were things in there that had inspired me in the past. WHOA! This was like an archeological dig! Finding all this stuff was just as powerful as looking at an old photo album. Seeing the magazine pictures of quilts that had inspired me, some enough to actually make them, along with toys for my kids (where did they get to? The toys, not the kids, I know where the kids are-more or less), holiday decorations and stuff for the house. One thing that touched me was the pattern for a wreath I had actually made for my mother, I know it had to be shortly after I got married so that was 25 years ago or so. I know there was some frustration and cussing going on as I remember my new step daughter asking me what "that word" meant and my husband looking at the ceiling. The other mind blowing find was a cut out from a magazine called "New Ingenue" that was out briefly in the 70's. Although it was a fashion magazine it was not like "Seventeen" at all and they always had section about making stuff out of thrift store finds (hummm.......that upcycle thing isn't new after all!). When I look at this pile of ephemera it amazes me how much of a part of my current life many of these things still are. The other thing that cracked me up was on the back of a 15 year old quilt picture-it was a magazine article explaining to quilters how to "explore the web". It made it sound like you needed safari hat and a flash light-who knew?
Well it is time to get ready to go out on the road again, this time to Issaquah Washington for Salmon Days. As you can see Gladys would prefer I stay home. 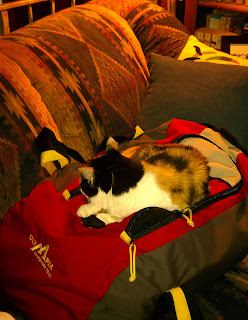