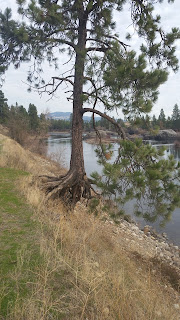 Time for another plant with a creepy sounding name from days of yore. I tend to buy plants off the "half dead" table at the local home center, so the labels are usually gone. What ever this thing was, the plant itself looked like a delphinium, but the flowers were different and it bloomed in the late fall. A couple of weeks ago it was the only thing left blooming out there, so I decided to throw the last of it into a scarf and see what happened. 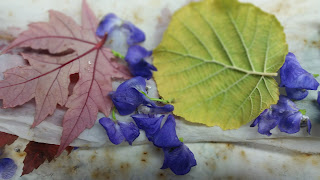 While it was cooking away I plopped myself down in front of Google to see if I could figure out what it was. After not too much surfing, I discovered it was Monkshood. It is poisonous (of course) and thus the deer don't like it (good enough reason for it to stay in the yard) and it blooms in the late summer and fall which is also a selling feature for me. By the time we get to late summer everything else is cooked in the heat. 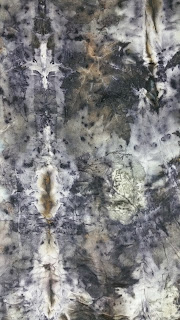 I used a smallish piece of silk crepe de chine with steel wool as the pre-mordant. The flowers did impart the smoky, blue/purple to the back ground, I suppose if I used enough of them it would dye the whole background that color, which could be nice. I did throw some of the leaves into other samples, but nothing came of it. At any rate, it was a nice experiment for the last blooming plant in my garden. Now there is a layer of snow out there and everything has gone to sleep for a long winter's nap.
Posted by Nan Drye at 9:24 AM No comments: 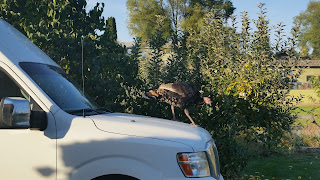 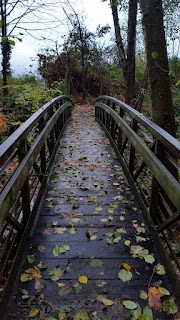 "Only put off until tomorrow what you are willing to die having left undone."
Pablo Picasso
Posted by Nan Drye at 8:14 AM No comments:

One last post before heading off to Seattle for Best of the Northwest. How is that for promotion?

This turned out to be a bit longer project than imagined in that the first time I let it set around too long and it molded. The recipe, such as it is, came off of Wikipedia for better or worse. It called for 20 horse chestnuts to 6 liters of rain water. The first problem was coming up with that much rain water, but if finally started to rain-YEAH! Even so, I went with considerably less water as you can see here. 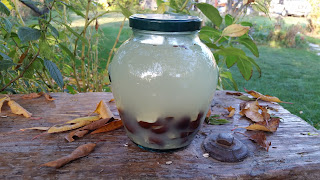 I let this sit for a couple of days and it did turn milky white. 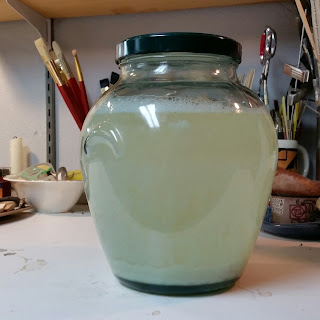 I strained off the liquid and then let that sit around long enough to let the sediment sink. Then I poured it off into a tub-lots of suds-that is a good sign for soap! 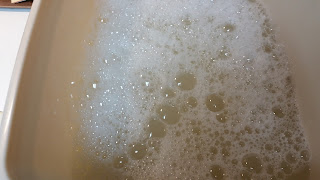 This is the before picture of a stained doily that I used for the experiment. 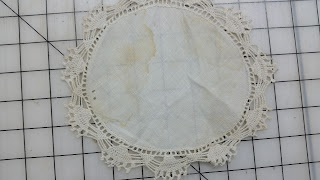 I let it soak for about an hour and it did get it pretty clean. The weird thing is that in addition to the brown stains it had very faint splatter type pink stains-I think those got even darker, although they don't show well in the picture. 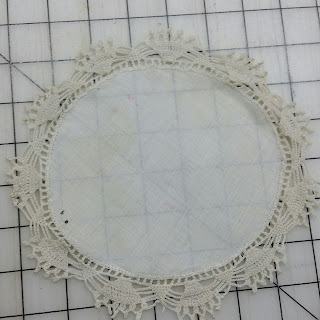 As far as getting linen to turn blue, that didn't happen, so I didn't bother to take any pictures. I would say it is a pretty good cleaning agent, it is possible if I had let it sit over night it would have totally bleached out the stains.  I would be interested to see if it would "bleach" colored paper or maybe naturally dyed fabrics. I saved the left overs in a mason jar for further experiments.  One should be cautious with this soap as horse chestnuts do contain poisons, so whether it is "safer" than commercial soaps is a question.

Hope to see you in Seattle!

"...in every curving beach, in every grain of sand, there is the story of the earth."
Rachel Carson 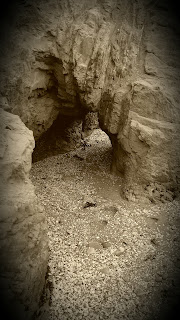 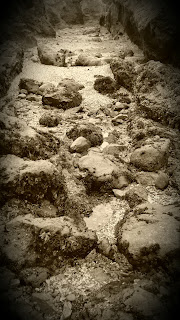 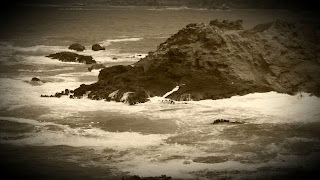 Just doesn't have the same ring to it as Throwback Thursday does it? I am not sure what it is about cold gray weather that makes me want to dig around in my book shelves, but here we are. I was looking for something else (of course) and came across these. I have kept them forever as they really inspired me at the time, to the point where I can trace the switch from my retail career to my art career directly to them. I have done embroidery of one sort or another since childhood and at one point, about 30 years ago, I was designing cross stitch patterns for magazines. By today's standards these are what you would call quaint, but after paging through them again I still think they have merit. 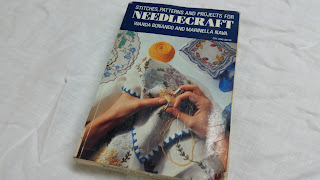 Stitches, Patterns and Projects for Needlecraft by Wanda Bonando and Marinella Nava
Copyright 1981, Harper Colophon Books
I was surprised that the copyright for this was from the 80's as it seemed older than that. This book covers about every sort of embroidery there has ever been since the beginning of time. While the projects in it are really conservative, it was a jumping off point for me. I used to check it out over and over from the library and then one day came across a discarded copy at a library sale and just had to have it for my very own. 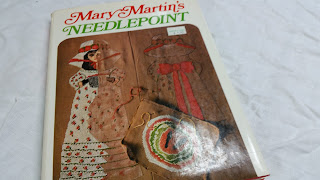 Mary Martin's Needlepoint by Mary Martin
Copyright 1969 William Morrow and Company
Yes, that would be the Mary Martin of Peter Pan fame. In fact, the picture on the back of the dust cover features her in her costume all stung up for flight. I not only really liked her designs, I got a kick out of how her needlework lived right along her theater and movie career. This was another library book, but then I found a copy at Aunties Books and had to have a copy of it for all of $1.95. 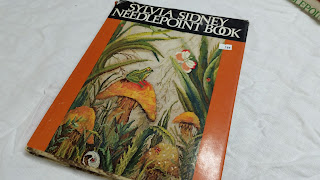 Sylvia Sidney Needlepoint Book
Copyright 1968 Van Nostrand Reinhold Company
Again, I really liked her artwork as well as the fact that she did all or most of her own drawings for the patterns, and showed you how to do it too if you were so inclined. While not particularly interested in needlepoint, I did use her methods to start doing my own cross stitch patterns. This one is also peppered with stories about her career in Hollywood. Again, it was a library book I checked out long ago, but I bet whoever traded in the Mary Martin book at Aunties also traded this one in too, so I had to get it for old time's sake-at a $1.99 who could resist? 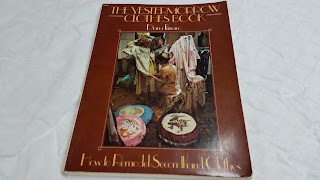 The Yestermorrow Clothes Book
by Diana Funaro, copyright 1976, Chilton Book Company
You could say this book inspired my entire art and craft career. I got it while in high school just about the time I learned to drive and was off to the thrift stores in Kansas City! I loved taking vintage clothes (real vintage, from the 20's, 30's and 40's) and rebuilding them. This book had great ideas and great general directions for taking stuff apart. When I look at it today, there are plenty of things in it I would still wear, and in fact, I see on sites like Etsy everyday. She had timeless vision. 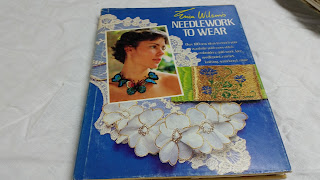 Needlework to Wear
by Erica Wilson, copyright 1982, Oxmoor House Inc.
Called the "Julia Child" of needlework, Erica may have been one of the first women to be a "craft powerhouse" long before the quilting girls got going. I remember doing her patterns as a child in the late 1960's and as a teenager in the 70's. Again, I came across this in a library and then found a used copy years later that I had to have just because. I think I found this one fascinating because she did fiber jewelry-and not macramé either! She used very traditional techniques to come up with really modern designs-for the early eighties. Now the clothes in particular look really dated, but at the time this book was ground breaking in that she was not sitting around doing stuff out of the past, she was making contemporary wearables using traditional techniques.

Ok, my tea is cold and whatever I originally started to do still isn't started, so I had better get back at it.
Posted by Nan Drye at 2:46 PM No comments: 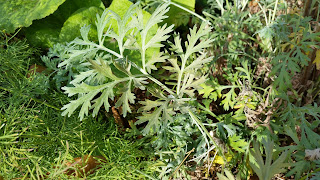 This plant makes a good steam print early in the spring and will make a yellow and green dye. Since the options for yellow are many, I like to turn it green. I start out by harvesting the artemisia. This is the wormwood of absinth fame. It also makes a great bug repellent. While I wouldn't rub it directly on my skin (any plant "active" enough to make a dye or have medicinal properties is also active enough to give you an allergic reaction) you can rub it on your boots and socks to chase away tiny critters trying to bite your ankles. The other handy thing about it is that it is considered a noxious weed in most states and nobody cares if you harvest it. It is quite abundant here in Eastern Washington. It grows in disturbed ground and has a much bigger leaf than our native artemisia, and also a potent sage smell.

I bring it home and chop it up, stems and all and put it in a neutral pot of water, big enough to hold whatever it is that I am dyeing that day. I simmer it for about an hour and then strain off the liquid. I put the liquid back in the neutral pot and then introduce silk fabric that has been pretreated with alum in the normal fashion. I let that simmer for about and hour and allow it to sit overnight. I remove it in the morning and rinse it out in clear water. 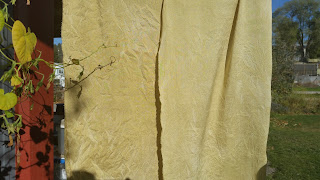 These were done just a few weeks ago and are more golden than the samples I did in the spring. Time of year probably made the difference. At this point I could either lay out some steel wool or rusted nails on it with a bit of vinegar water spray and let it sit overnight, or I could boil it in an iron pot for a bit and it turns green. Then I can use it to eco print with whatever makes a print with iron or rust. 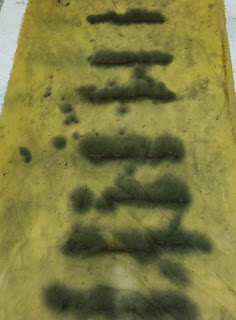 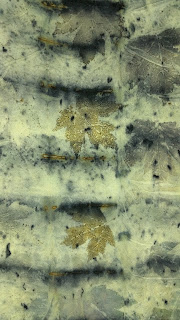 The top photo is what it looked like after the nails had been removed and then the bottom image is after the eco print. The next two are finished items, the first a detail of a scarf that was boiled in an iron pot and the second the beaded infinity scarf made from the above samples. 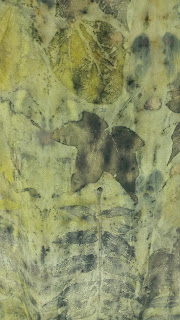 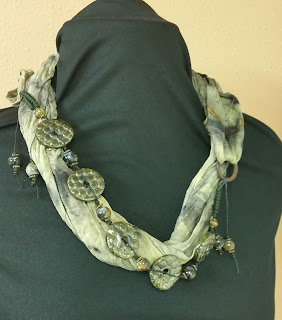 Thought for the Week 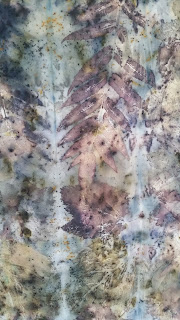 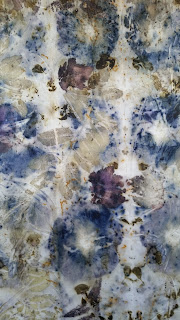 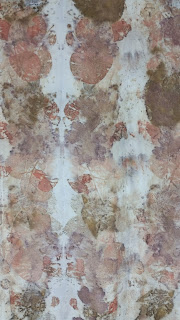 Looking for my scarves and other eco printed items? You can find them in the following online stores:
Drye Goods now has its own SquareUp site, CLICK HERE
Pottery Place Plus Online Store; CLICK HERE