A friend had said she made sun tea out of all the unmarked, one of a kind tea bags in the cupboard and it turned out great. Since I had a collection of those type of tea bags I thought I would give it a try. I did not have quite the same luck, mine tasted like a puddle by the side of the road.

So now what to do with it? I had some scraps of crepe de chine that I had used for experiments. I threw rose leaves in so I knew I would get something, but also put in a bunch of weeds and flower heads that I couldn't remember if I had tried before. As you can see the rose leaves came out, but no sign of the other plant material.

It is pretty but I thought it would be interesting to experiment with it. The fabric was mordanted with rusty nails to start with. In the past when I have overdyed such things with black tea or coffee they can be anything from gray to black. I also decided to see how much difference heat would make. So I put part of the tea in a stew pot and part in glass measuring cup. I heated the tea in the blue pot until boiling, turned off the heat and put the wetted strip in and left it overnight. I also left the cold experiment overnight as well.


Since the sun tea was a mixture of black tea and herb tea and who knows what else the results weren't as dark as they sometimes are. As far as the heat goes, the one that was in hot tea (on the left) is a bit darker, or more brown. Tea is pretty hard to wash out anyway, but the one that was heated probably will last that many more years than the non-heated one. 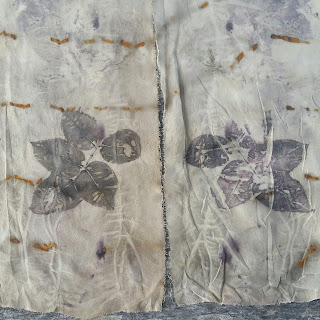 I have a bunch of the strips so I will do and share some more experiments this summer. I like having stuff like this around. There is no pressure so it is easier to ask the question "Why not?" instead of freaking out that something may be "ruined".
Posted by Nan Drye at 11:37 AM