Time for a Real Introduction!

I have been so busy playing around with the gadgets, the rest of this looks empty! Since I generally feel that the internet is one of the biggest time sucking black holes ever invented it surprises me just as much as anybody that I decided to do this. For the last 13 years or so I have been making clothing and selling it at fairs and other venues. I also make mixed media art-books, mobiles, paintings, etc. Recently, I have been experimenting with encaustic and have found a new love. I show this work now and again when the opportunity arises. The clothing tends to get its day in the sun (and rain, snow, hail, hurricane force winds-you name it)at art fairs around the region as well as stores, galleries and the co-op I belong to Pottery Place Plus. The poor mixed media tends to hang out in the loft. I find it strange that once you do one thing, you are pegged for life. People even find it unusual that I make more than one type of clothing. Working in series is great; right now I have a thing going on with scarves that has inspired more ideas for garments than I will ever get done in this lifetime or the next. I also have just started a mixed media series based on the big spoons and forks from the sixties-again more ideas than I can get done. I just can't figure out where the rule got written that an artist is more creative if all they do is the same thing over and over and over. So, I decided that maybe a blog would be a better way for people to get to know me and what all my work is about.
Besides-if I don't find some place to blow off steam about some of things that have been going on lately I am going to turn into my father-the other day I started yelling at the newspaper! Yes-the actual piece of paper! 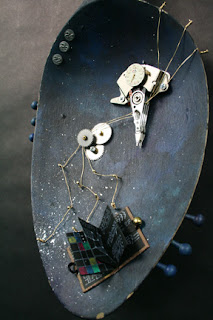